Fort McMurray Wood Buffalo Economic Development & Tourism (FMWBEDT) is pleased to announce the appointment of three new members to the organization’s Board of Directors. 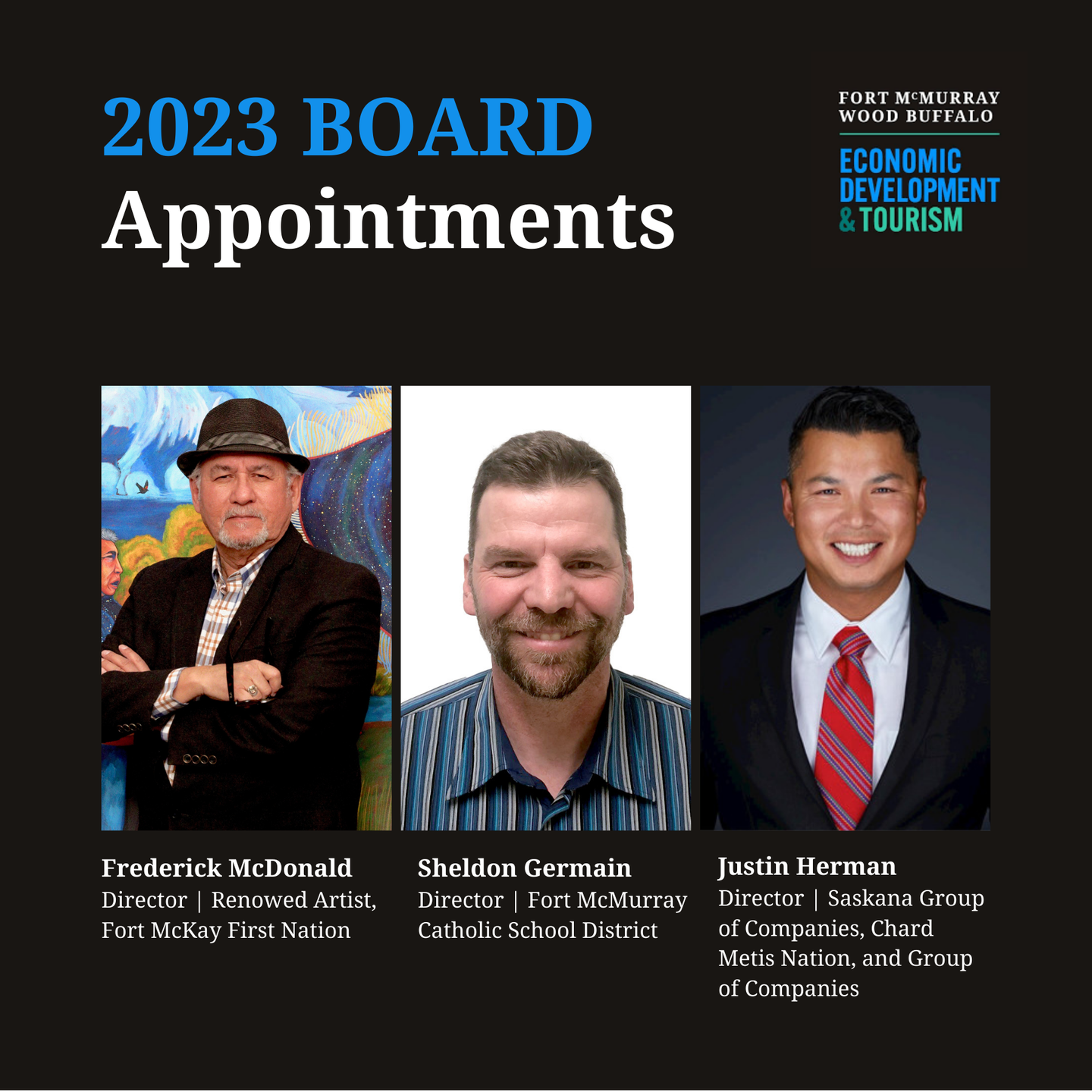 “On behalf of our Board, I’d like to congratulate and welcome Fred, Sheldon, and Justin to the Board of Directors,” said Gregg Saretsky, Board Chair, FMWBEDT. “Each Director brings a wealth of knowledge and experience to the table, representing important voices and perspectives from a cross-section of sectors and industries.”

“We are thrilled to welcome three exceptional community and business leaders to our organization,” said Kevin Weidlich, President & CEO, FMWBEDT.” This is an important time for our organization, and we are excited to add these talented leaders to our Board as we increase our bench-strength and create transformative economic outcomes for the region.”

FMWBEDT is also pleased to congratulate Board Director Kristi Hines on her term extension to the end of 2024. The Board of Directors have a process for term renewals and actively seeks new Board Members on a continuous basis.

Frederick McDonald is a renowned artist, business leader, and community champion. Frederick is a member of the Fort McKay First Nation and was raised in the traditional hunting and trapping lifestyle of his parents and ancestors. A graduate of the University of Calgary with a Master’s in Fine Arts, Frederick expanded his creative deliberation to include business leadership, previously serving as the CEO of the Fort McKay Group of Companies, and the President of the President of the Northeastern Aboriginal Business Association. Frederick has served as a Board Director for a number of organizations including Keyano College Foundation, Fort McMurray United Way, the 2015 Western Canada Summer Games, and the Alberta Foundation for the Arts.

Sheldon Germain is an experienced community leader with a proven track record for creating transparent and results-based cultures that deliver valued services for residents and partners within Fort McMurray Wood Buffalo. Sheldon is the Principal of Sister Mary Phillips and holds a Master’s in Education Administration and Workplace Leadership from the University of Prince Edward Island, and a Bachelor of Education and Business Administration and Physical Education from the University of Alberta and Keyano College. Sheldon’s extensive governance experience entails serving as: Board Director for the Fort McMurray Airport Authority; Board Director for the Regional Recreation Corporation of Wood Buffalo; and Councillor for the Regional Municipality of Wood Buffalo, where he served six terms leading the community through rapid expansion, an economic downturn, and the 2016 Horse River Wildfires.

Justin Herman is the Founder and President of the Saskana Group of Companies, and the Chief Executive Officer of Chard Metis Nation and the Chard Metis Dene Group of Companies. Justin is a member of Chard Metis Nation and is fluent in Dene/Chipewyan, as it was the first language he learned while growing up on his family’s trapline. Justin is an accomplished community leader and entrepreneur, owning various companies specializing in electrical, construction, staffing, and soft cover fabrication. The staffing division of his company (Steam Source) has grown to become the largest Indigenous staffing company in Canada. Justin previously served as the President of the Northeastern Alberta Aboriginal Business Association, Board Director for the Fort McMurray

Fort McMurray Wood Buffalo Economic Development & Tourism (FMWBEDT) is a wholly owned, arm’s-length entity of the Regional Municipality of Wood Buffalo, governed by an independent board of directors and managed by an entrepreneurial, customer-centric team. FMWBEDT’s focus is on creating new wealth for the region, measured as economic impact. FMWBEDT is responsible for growing and promoting investment into the region, supporting the growth of startups and existing businesses in the region, and generating tourism and visitation to the region. Our team works in concert with a number of organizations inside and outside the region to boost Fort McMurray Wood Buffalo’s reputation and strengthen our region’s competitiveness in the national and global economy.